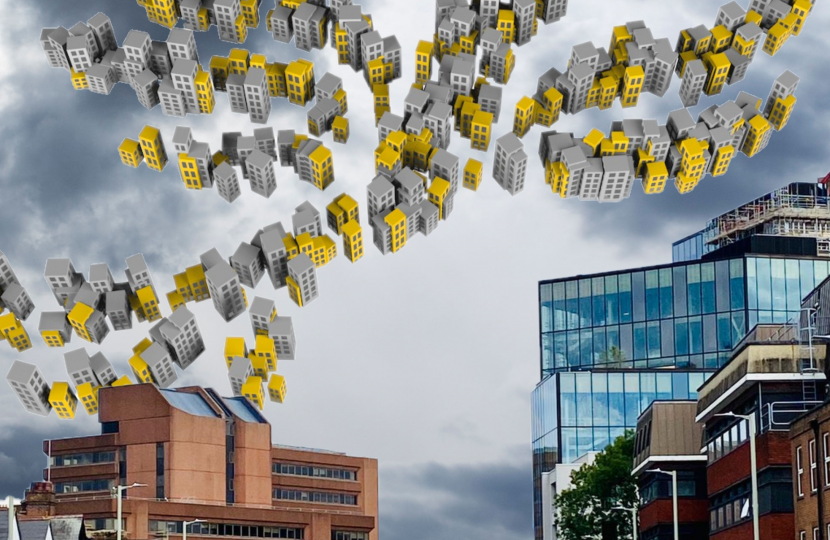 At WBC’s full council meeting this evening, Councillors will be voting for the Local Plan to be submitted to the National Inspectorate for assessment and sign-off. The current plan includes a housing target of over 14,988 homes by 2036.

To date, the Lib Dem Mayor and Council have moaned that the numbers are too high and have consistently blamed the Government so as to generate headlines, publishing endless leaflets and social media posts passing the buck. But today it has been confirmed that the numbers could have been challenged by the Council in their Local Plan, yet they have failed to do so, with their current Plan going out of date over three years ago (having been adopted in January 2013 and lasting five years).

Watford Conservative MP, Dean Russell, noted that he has been discussing local planning with Ministers and the Secretary of State for MHCLG since being elected. Today his question highlighted the Liberal Democrat’s duplicity in making headlines out of housing targets whilst not mentioning them in their Local Plan. Mr Russell has shared that he asked the Housing Minister, Rt Hon Chris Pincher MP, to confirm if the Housing Needs targets are not set in stone, which was confirmed in writing. Mr Russell subsequently followed this up with a question to the Secretary of State for MHCLG, Rt Hon Robert Jenrick MP in Parliament, earlier today.

In his letter, the Minister confirmed in writing that ‘the standard method is only the starting point for local authorities in identifying housing need in a local area’ and specifically states ‘…that not everywhere will be able to meet their full housing need and depends on local individual circumstances.’

This means the Local Plan can be used to challenge the Housing Needs target by offering a credible alternative, something Watford Lib Dems have failed to do.

Understanding the urgency and relevance of this information, Dean RUSSELL MP has since written a public letter outlining a point of information for all WBC Councillors so that they are aware that the Local Plan could be used to challenge the housing need target, which it currently does not, ahead of this evening’s vote.

“The Liberal Democrat Mayor and his Councillors have been playing politics with planning whilst failing to do their homework. Tonight, they risk locking our town into the proposed housing numbers without challenging them in the appropriate way.

“It is perplexing that despite persistently slamming the government, the Local Plan for which the Lib Dems are responsible, does not appear to challenge the target nor present a credible alternative for the Planning Inspectorate to consider.

“It is also ironic that whilst the Watford Lib Dems have been putting out leaflets filled with mistruths claiming our hardworking Conservative MP, Dean Russell, hasn’t been standing up for the town, it has taken our MP’s own intervention to establish the fact that they have failed to raise this important point in their own Local Plan.

“No doubt, the local Lib Dems will say they tried everything to reduce the figures, but how could they fail to raise these concerns in their own Local Plan and provide credible alternatives for discussion with the National Inspectorate, in the way other local authorities have? They could have written it on every page – Instead, they don’t even mention their opposition to the numbers.

“Even the Mayor’s own foreword to the document doesn’t mention anything about over-development or the housing needs numbers being too high – let alone offering credible alternative solutions. The Local Plan is possibly the most important document to make these points and they are nowhere to be seen.

“The truth is the Lib Dems have been pro-tall buildings and the party of over-development for years across Watford, well before the new targets were set just a few years ago. Local people know Liberal Democrats = Local Developers.

“Watford residents don’t understand why Lib Dem Councillors don’t just own up to the fact that they actually want these developments and stop blaming everyone else for their planning decisions. Sadly, the Lib Dems just blame the Government whilst approving the 28-storey buildings soon to be towering over the town – without even trying to oppose the idea. No wonder local people have started calling them ‘Taylor’s Towers’.

“For too long, the Lib Dems have been far too busy playing politics with planning. In doing so they have overlooked the day job and failed to do the one thing that could raise concerns with the targets to the National Inspectorate.

“As Watford’s MP, Dean Russell, rightly pointed out in his letter about the vote tonight, if they approve this plan, they are either agreeing the numbers are what they want or they have chosen not to challenge them in the correct way.

“Watford Conservatives see that, by voting through this Local Plan in its current form tonight, the Lib Dems will finally show their true colours and willingly and deliberately lock Watford into housing targets they claim publicly to oppose yet privately support.”