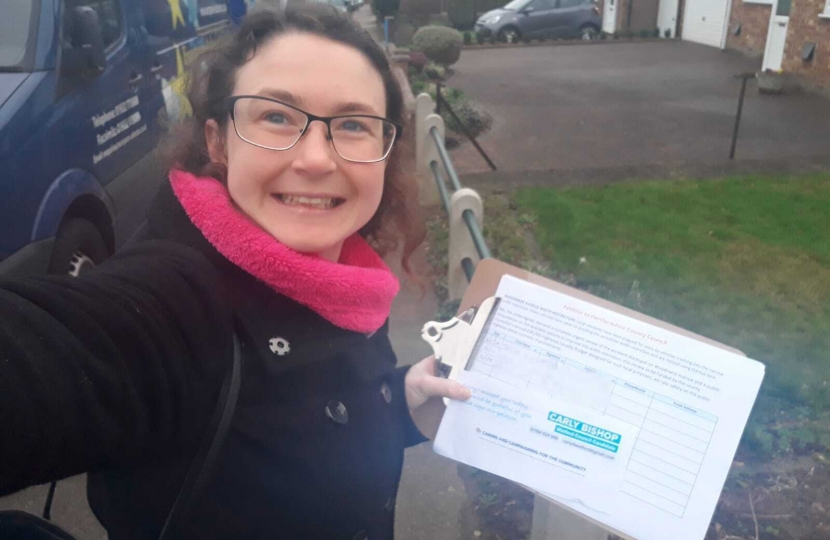 Tudor Conservative Candidate Carly Bishop is leading a campaign to change the dangerous width restriction in Woodmere Avenue after years of complaints about damage to cars, serious injuries and the stress caused to many of the drivers who use it.

In February, Carly held a public meeting in the Tudor Arms to gauge public opinion on the width restriction. The meeting was packed with people queuing down the stairs and out into the garden, confirming the strength of local feeling. Local residents said that accidents took place there throughout the day and night and that they were angry and wanted the width restriction changed to something safe.

In March, Carly's team organised a petition to demand that the Council review the width restriction. Within 10 days over a thousand residents had signed up. The Council were presented with the petition and in May a meeting was called at County Hall to discuss the issue which Carly attended to represent the concerns of local residents. Carly pressed for a formal review of the width restriction. Some possible alternatives were discussed, including an ANPR numberplate recognition camera, doing away with the need for any barriers at all, or simply replacing it with
a less aggressive barrier such as the one in Tudor Avenue.

Two months after the meeting the Council painted new white lines at the width restriction to assist cars to line up before passing through the barrier. Some local residents are now saying that accidents ‘appear to have worsened’.

Carly said: "When I started this campaign, some residents told me it would come to nothing as other people had tried and failed to get anything done about it, even though it is clearly an accident blackspot. I told them that we can make a difference if we all worked together and that we will get this changed. Following the meeting at County Hall I am more convinced than ever that we can get this monstrosity removed and replaced with something more sensible. The residents of Tudor have given me so much support and encouragement and I am determined not to let them down. Common sense will prevail."

Hertfordshire County Council has now released its report which you can read at the following Facebook page: bit.ly/WoodmereFB

Budget 2021: The Chancellor's Speech in Full

Read and Watch the Chancellor's Budget announcement here in full. One year ago, we promised the British people we would do whatever it takes to provide security and stability.