Dean is a husband and father, and the founder of leadership and pitch consultancy Win That Pitch (a brand of Epifny Consulting). He was the former Conservative Parliamentary Candidate for Luton South in 2017 (and Luton North in 2015) and a former District Councillor where he led a significant reform to create a Health & Wellbeing Partnership.

Coming from a working-class background, Dean has since become known as a successful polymath with a diverse career spanning from physics to the arts, senior roles advising global brands, CEOs, government and philanthropists through to running his own business.

Described as "One of the smartest minds in the marketing industry.", he has travelled widely including performing charity missions in the Philippine jungle through to managing teams in business across Europe, Middle East & Africa. Dean often advises start-ups and small businesses and was appointed as a start-up mentor in 2018 by London & Partners as part of their Business Growth Hub.

An active campaigner and is regularly helping canvass and deliver at associations across the UK, especially in Hertfordshire, Bedfordshire and Buckinghamshire. Dean has been involved in the Conservative Party at all levels including as a digital advisor across multiple elections and helping fundraise for various Conservative Associations.

Dean recently authored 'How To Win: The Ultimate Professional Pitch Guide' and is often asked to speak at events and give interviews in publications and broadcast media to advise businesses and entrepreneurs how to pitch and present on the global stage successfully.

Over his career, Dean has been appointed as a Volunteer Champion for the Media Trust, a former Vice-Chair of a Regional Federation of Small Business, Fellow at the Royal Society of Arts, Manufacturing & Commerce and Member of the Hertfordshire Chamber of Commerce. He has lectured at multiple universities around the UK and has been appointed as a lecturer for the Institute For Direct & Digital Marketing and as an adjunct lecturer at Ashridge Business School (part of Hult).

Due to Dean's experience in communications and business, he is often asked to attend industry events including as a judge for awards. This includes attending as a VIP as a representative of the business community to events as diverse as the National Film Awards, Worlds Fashion Awards and the British Association for Screen Entertainment Awards.

Formerly Dean was a special advisor to the British Interactive Media Association, Vice-Chair of the NHS Healthspace Patient Reference Panel, a member of the NHS Clinical Reference Panel and a judge for the Third Sector Excellence Awards.

Dean has been a regular commentator on communications, especially in social media, digital and new technologies. This includes writing columns, articles and press interviews for publications including the Health Service Journal and Third Sector magazine. Most recently this includes television interviews on news channels including Indus International News.

During his early professional career, Dean was actively involved in promoting online accessibility. The principle of enabling access to all irrelevant of (dis)ability. Dean wrote one of the UK's first professional accessibility courses, led the world's first accessible Flash viral game for the RNIB, and was invited to join the PAS 78 BSI standard review panel.

Dean has a passion for charities, education and health, which led him to co-author several professional reports on these sectors. This included delivering strategic consultancy for the Department of Health, reviewing the entire NHS website landscape – the findings were later revealed in the Health Service Journal and The Guardian newspaper. Dean was also a founding Vice Chair for NHS Healthspace, which was the first initiative to investigate allowing patients to access their Summary Care Records directly online.

His experiences during charity missions, including most recently giving the gift of hearing to children in a deprived area of Manila with the Starkey Hearing Foundation and supporting a Basket Brigade to provide food and gifts for struggling families at Christmas, informed his work in the community. This included speaking at the Conservative conference in 2017 on the topic of loneliness, with his speech 'Go Knock On The Doors' which was received positively by the Party and more widely. He has also been a long-term advocate of mental health for young people, and actively supported the development of a report by a youth council into local schools counselling provisions in Hertfordshire in 2010/11.

Dean is an artist and has produced commissioned artworks for auctions to raise funds for good causes. Prints of his artworks have been signed by three former Prime Ministers and over 60 MPs.

Dean studied Physics and Business Studies as a degree (achieving a BSc(Hons)) and completed an MPhil in Physics and Material Science with his thesis 'The Preparation and Characterisation of Gallium Nitride & Group III Nitrides'.

Along with his business book 'How To Win', Dean is a published children's book author with four books available currently and has just completed his first novel.

Dean Russell elected as the Member of Parliament for Watford

As many of you will be aware, Dean Russell was elected MP for Watford on 12 December 2019, and is one of the 109 newly appointed Conservative MPs. 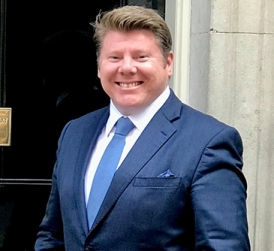